Being tired or drained is simply not fun, especially if you want your brain working at it’s highest performance level.

That’s why caffeine is consumed by millions worldwide.  It’s an efficient natural stimulant that is well tolerated by many people, and Caffeine can definitely give you a nice edge on your energy levels. Numerous studies have shown that Caffeine supplements increase energy and concentration. [1]

But it’s not the type of energy and concentration you want for productivity.

On it’s own, Caffeine is not a great cognitive enhancer.  Users often experience a jittery or anxious mental state followed by a crash, especially in people that have built up a tolerance.

When L-theanine is paired with Caffeine it removes the undesirable side effects of the Caffeine, leaving only the pure nootropic properties of both compounds. The energy and motivation from the Caffeine is harnessed and smoothed over with L-theanine, creating a long-lasting feeling of alertness and attention without jumpy thoughts or anxiety.

SMART CAFFEINE is a naturally potent and popular nootropic stack.  Many scientific studies have shown that SMART CAFFEINE’s ingredients, Caffeine and L-theanine, have the following benefits when taken together [3][4][5][6][7]:

SMART CAFFEINE creates a relaxed yet alert state that is ideal for focusing and thinking clearly.  Users typically experience results for 3-6 hours.

WHAT ARE ALPHA BRAIN WAVES?

Brain waves are classified into four categories (Delta, Theta, Alpha, and Beta), each with an associated mental state [Fig. 1].

Stimulants, like Caffeine, promote Beta waves and suppress the others, leading to increased stress, anxiety, and over excitement.  It can be very difficult to focus and concentrate when you are emitting Beta waves

Delta waves are only seen in the deepest stages of sleep and Theta waves are seen in light sleep and drowsiness.  Alpha waves are present during wakefulness where there is a relaxed and effortless alertness.

Alpha waves create a calm and productive state of mind. 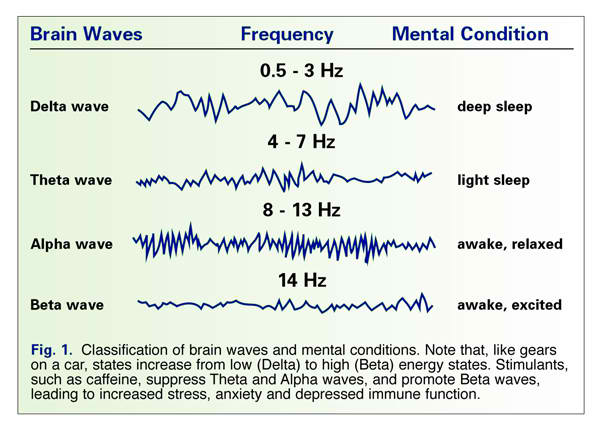 L-theanine is a unique amino acid that can easily cross the blood brain barrier and affect the central nervous system. Studies have shown that L-theanine directly stimulates the production of Alpha brain waves.  The graphic below compares the findings when individuals were given either L-theanine of a placebo during a demanding attention task.  The results show significant increases in Alpha waves and activity in the right posterior parietal cortex, a region in the brain important to visual stimulus and attention. [2] 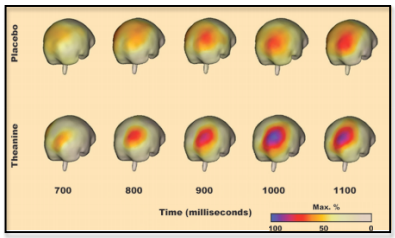 HOW DOES SMART CAFFEINE WORK?

Independently, Caffeine and L-Theanine have somewhat polar effects on the mind and body.  However when the two are combined the effects do not simply negate one another. Instead they work together very synergistically, allowing the user to fully benefit from the positive aspects of both compounds without the negative side effects.

This Natural Stack provides a clear and focused energy feeling, rather than the short-lived stimulant rush of Caffeine by itself.

There have been many recent clinical trials conducted by various organizations proving that the combination of L-Theanine and Caffeine increases the ability to focus without the over stimulating effects of Caffeine alone:

The Cognitive Neurophysiology Laboratory in New York conducted testing for 4 days on volunteers from the age of 21 and 40 and found that “L-Theanine and Caffeine in combination affect human cognition as evidenced by oscillatory alpha-band activity and attention task performance.” [4]

A study on the cognition and mood of healthy volunteers found that “The L-Theanine and Caffeine combination improved both speed and accuracy of performance of the attention-switching task, and reduced susceptibility to distracting information in the memory task. These results replicate previous evidence with suggests that L-Theanine and caffeine in combination are beneficial for improving performance on cognitively demanding tasks.” [5]

In a detailed study, the researchers concluded that “The results support previous evidence that L-theanine and caffeine in combination can improve attention” [6]

A literature review from the School of Psychology in Australia stated that “L-theanine may interact with caffeine to enhance performance in terms of attention switching and ability to ignore distraction.” [7]

1. L-theanine and Caffeine is the #1 recommended beginner’s Nootropic stack at the excellent r/Nootropics community on reddit.com.

2. L-theanine (y-glutamylethylamide) is found almost exclusively in the tea plant.  Some teas have more than others. The average green tea drinker consumes about 20 mg of L-theanine a day.  That’s why people may feel relaxed, calm, and focused after drinking several cups of tea.  However you would have to drink many cups of tea to reach most desired nootropic effects of L-theanine.

Take a serving of 1 - 2 capsules whenever focused energy is desired.  Avoid use in the evening.  Total daily dosage should not exceed 6 capsules.